skip to main | skip to sidebar

First he raps about Kobe and asks him how his ass tastes, and now this! Shaq is just killing Kobe... I wonder what the MVP will do for some payback.

A Day at the Park -- Practice Notes

-- Jim Zorn was wearing pants. He has worn pants everyday this week. Hopefully they are sweat-absorbing pants of some kind. I wore pants today as well. Pants were not a good choice.

-- An air horn was signifying the end of each session of practice. This is a change from the Gibbs 2.0 regime. Gibbs used a whistle to end each session. Media members were commenting on the difference. "The guys like Fabini just kinda toot the horn at offbeat times," Zorn said after practice. "You know he'll run up to our equipment guy and just grab it, hit it, just for fun. We gotta get our equipment guys to stay away from the O Line."

-- Another difference that some of the assembled media pointed out was that there weren't any refs at the practice. Zorn was asked about the significance of this after practice, but it was boring, and I didn't listen to what he said.

-- Speaking of special teams, rookie punter Durant Brooks was the essence of the "lonely kicker" at practice. He just looked like he wanted to punt, but no one was helping him out. I felt bad and wanted to ask him if he wanted to boot some to me, but I don't know how the coaching staff or the pr department would have felt about that. Maybe another day, huh?

-- After watching Ethan Albright work the Jugs Machine, it's obvious why he's a pro bowler. He really has great control of that thing. (All kidding aside, the Red Snapper is one of favorite Redskins)

-- After rookie receiver Devin Thomas caught a long pass from fellow rookie Colt Brennan, Mike Sellers was clearly heard barking, "YOU BETTER CATCH THAT" at Thomas. "It's fun," the rookie pass catcher replied when I asked him about it. "You know the older guys mess with me a little bit, but it's all in good company."

-- Byron Westbrook was wearing full length tights under his shorts. (He didn't participate in drills, he jogged on the side)

-- Free Agent defensive tackle Kevin Huntley was the only player sporting warm up pants at today's practice.
Posted by littles: at 2:10 PM 4 comments:

A Day at the Park -- Summer Vacation

Today's OTA was the last one before the team reports for training camp on July 19. So as the team scattered for their "summer break", I tried to get a feel for the kind of plans members of the team have before the season really starts.

Shaun Suisham
"Heading back to Wallsburg, Ontario, my home town. I host a camp for 200 youth. That'll be June 21st. so, I'm looking forward to that, and then I'll be back here for the beginning of July."

Chris Cooley
"I live here. I'll probably be here most of the time and work out. No [vacation plans]. Spend time at home."

Fred Smoot
"Maybe go to Atlantis or something. Something real out of the way chill. Watch a little bit of TV, no TV, I want to get away from the TV and you know, just chill. Get a peace of mind."

Devin Thomas
"I don't have time to vacation. I got to stay on top of everything and keep working. Just prepare myself for the training camp."

Jason Campbell
"We gonna have a couple guys, you know we'll still throw here and there, but you understand that guys are also going to take some time away and do things to be with their family's and take trips. At the same time, we can't get far behind and you can't not do anything. You have to do something, you have to stay in shape and you have to try to do something to keep youself where we left off with OTA's.

Jim Zorn
"My mind is on this. I've got things to do. I want to relax a little bit with my family because I know what's coming. I know the seriousness of what I'm about to partake in."

Definitely the kind of things you what to hear from your #1 QB and your Head Coach, huh?

See you in 37 days at the National Conference Center.
Posted by littles: at 1:34 PM 3 comments:

As I sat down here in my seat in the media room, I was blessed with a sight that any blogger would jump for joy over. Fred Smoot rolled up right in front of me in his 1964 Chevy Impala, at least that's what I believe it to be. 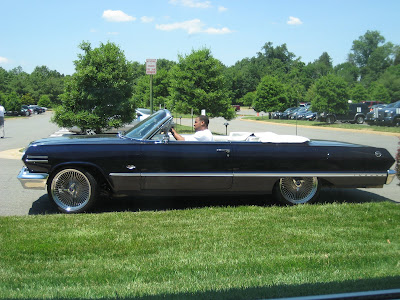 He was, of course, "hittin' dem switches", as I beleve the kids say. Also, keep in mind that the volume from his bass-heavy speakers was literally rattling the windows in front of me.

Not only did Smoot provide me with my best image from the day, he also dropped the biggest bombshell as we spoke after practice about the next step in the evolution of Smoot Smack.

"Soon we be headin' to the shelves. We gonna get that intenet thing going where dey can come on and talk to me back and forth, blogging, and just see the day-to-day life of me and my football team. It should be ready in about a month."

WAIT... Fred Smoot is going to be blogging???

"Yea, actually I'm going to start off and I'll just write my stories and you just flow after that. You just flow. I'll be writing back to my fans."

"I read it before. Cooley would tell me about it. He'd say how it's a hassle sometimes, but I be like, man, come on, I've been talkin' noise my entire life. What people say don't really hurt me."

Let the countdown to Fred Smoot's blog begin. The entire internet can only hope Smoot stays true to his word.
Posted by littles: at 1:12 PM 101 comments:

A Day at the Park -- The Prank War

Center Casey Rabach and Kicker Shaun Suisham had what many observed to be an onoing fued during this week's round of OTA's. I admit that I got word of this very late in the game, but I did hear something about Rabach parking his truck in Suisham's spot in the lot, and Suisham letting the air out of Rabach's tires after leaving him a note that said "Parking for Kicker's Only". Nothing too heated, but seemed like something fun. So I went to the kicker to get his take on the week's events.

"I think we both got through the week alright. I'd be ok with it if it just died with mini camp here. I don't want it to [continue through training camp]. I think it's done. A little offseason fun."

So it looks like the kicker is calling a truce. Something tells me the center -- who declined to comment -- may have other ideas.

A Day at the Park -- The Media Vending Machine

Don't you just long for the days when soda machines had nothing but 12-ounce cans, not these 20-ounce behemoth bottles that are the norm nowadays? Even better, you'd be lucky to find one of these new-age machines that cost less than a dollar for a single bottle of soda. Fortunately, the Washington Redskins have your back; well at least they have the backs of the people who cover the team.

Located in the media room at Redskins Park is the world's -- and by "world's" I mean "Ashburn's" -- greatest vending machine. Get this... 25 cents for a 12-ounce can of soda. So, not only are you just spending a quarter, you don't have to slurp down 20 ounces of some carbonated beverage.

Now all we need is a candy machine that dispense Three Muskateers Bars for a quarter as well!
Posted by littles: at 10:56 AM 1 comment:

Yes, it's 1:50 am here on Wednesday, December 12th. Word is that the long-awaited Mitchell Report is coming in the next day or two. We felt like it was very appropriate to put together our own report. Now understand one thing, this is pure speculation and names that we think could appear on the Mitchell Report. Some of these names may be put on here for the simple "wow factor". You decide which ones.

Here they are in no particular order.

Blog Show and Senate Insurance. The ancient Greek Gods couldn't have created a better pair! This match made in heaven was due in very large part to the very hard work put forth by the dynmic duo of Dan Steinberg and Jamie Mottram. It may look like all fun and games, but I can assure you that they would not agree. I think their dedication shines through when Blog Show is stacked up against the competition. Oops, that certainly was unprofessional, now wasn't it? Great win in Piscataway yesterday. Chris Turner is the future at QB for the Terps, at least for the rest of the 2007 season. This team has the potential to do some big-time things, but it needs a confident qb, something that Jordan Steffy just doesn't look like at the moment.

Honestly, this win makes last week's loss to Wake Forest hurt a little bit more. 4-1, undefeated in the ACC, and ranked in the top 25 sounds a lot better than 3-2, 0-1 in conference, no votes, but we move on to a huge home game with Georgia Tech.

Should be a great autumn Saturday in College Park with the Yellow Jackets in town for a noon kickoff. The early morning tailgate will begin with most people still sleeping off the hangovers. Special guests are sure to make an appearance with the one and only Phil Elkins finally returning to Maryland for the weekend.

ps - If you haven't already check out Steinz on the DTC, and make sure you read ALL the comments. Here's some more fuel for the fire.

The Leader in the ClubHouse for YouTube of the Week

what the heck is this?

comments, concerns, suggestions for the dude?

what in god's holy name are you blathering about?